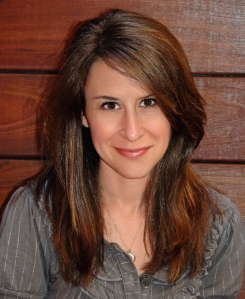 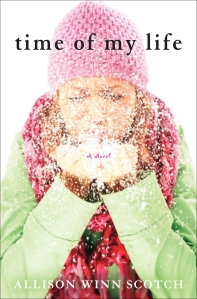 I’m the New York Times bestselling author of Time of My Life and The Deparement of Lost and Found. I also write for a slew of magazines, these days primarily focusing on celebrity interviews. I live in NYC with my husband, two kids and our dog.

1. Tell us about your latest book. Time of My Life is the story of Jillian Westfield, a contented but not truly fulfilled, stay-at-home mom who has lingering “what ifs” about her past and her happiness. She wakes up one day seven years in her past and has the opportunity, should she so choose it, to rewrite her future.

2. How did you get started as a writer?

Well, I wasn’t always determined to be a writer. I was always good at it, and people always told me I should pursue it, but to be honest, when I graduated from college, it simply didn’t seem viable. I mean, how does someone make money as a writer? It seemed ludicrous. I tried on a few different career hats, and one – doing an internet start-up – led to a bunch of freelance writing gigs (I was doing the web copy for the site, as well as the press releases, which led to being hired by a bunch of the site’s partners). From there, I was retained by a leading PR company to ghost-write for celebrities, and from there, on a total fluke, I was hired to ghost-write a wedding book for The Knot. With that under my belt, I landed some national magazine articles, and one thing led to another. (Though I don’t mean to make this sound easy. It was feast or famine for a while, and I worked MY BUTT off to establish myself.) Eventually, I wanted to try my hand at something other than service pieces for mags, so I wrote a novel that landed me an agent but didn’t sell. So then I wrote another novel, which I loved, but said agent did not. We parted ways, I found my current (and fabulous) agent, who sold that book – my debut, The Department of Lost and Found – in a four-way auction.

It really all depends on where I am in the cycle of a book. Writing, promotion, edits, hanging out and doing nothing… But generally, I take my son to school around 8:30, get home, have breakfast, catch up on my internet surfing and then get writing for a few hours. I’ve found, especially with fiction, if I don’t tackle it first thing in the morning, I’ll procrastinate it all day and won’t get it done at all. So better to get it out of the way right away! From there, I usually break for a workout/lunch/errand running, and then get back to my desk for more writing/emails/whatever other work needs to be done before walking the dog in the late afternoon. My sitter leaves at 6pm, so I shut down, make dinner for my kids, put them to bed, eat dinner with my husband and then try to vegetate in front of the TV/computer/a good book.

I’m lucky enough to be able to work out of a home office in NYC, which is a real luxury, I know! My desk is up against a wall with three big windows overlooking the trees on our street. On the wall to my right is a huge painting of an Underwood typewriter, which we bought when I first flirted with success, and I love it even to this day. Behind me is a Precor elliptical, which I hop on – as I said above – to blow off some steam or just give my body a break from sitting and staring at the screen all day! And also to my right, just beneath the Underwood painting, is a daybed, which primarily serves as my dog’s hang-out spot during the day.

Gosh, well, when I’m asked this, I always say it is IMPOSSIBLE to choose because a) a lot of my friends are writers (hee) and b) a lot of different books have affected me in different ways. But that said, I’d say that the book that really blew me away was Joshua Ferris’s Then We Came to The End. It was one of those books that I just could have NEVER written, never. Which might sound like a weird reason to be enamored with it, but I think that when you’re a writer, you start evaluating books differently than the average reader. You pick them apart, assess whether or not, if given the same idea, you could write a similar book on your best day. But even on my very, very best day, I could have never written this book. I thought it was whimsical, surprising and really, just genius. Not everyone agreed, but that’s why there are so many options out there to choose from!

I used to want to be an actress. That’s probably not so crazy, but I DID appear nude in my college’s production of Hair. Ha! Post-college, I actually shot some commercials and got my SAG card until I switched gears, and as I mentioned above, things fell into place for me as a writer.

I cannot live without Fresca, Orbit bubblement gum and Napster. Like, seriously. I get withdrawal symptoms from them.

I have a numerical near-photographic memory. I still remember phone numbers from random people years ago. My husband used to not believe this but now, he tells me a phone number or some important stat, and just says, “Got it?” And I do! My son is the same way, and I have to say, seeing it in someone else is a little freaky.

“If you asked me what I came into this world to do, I will tell you, I came to live out loud.” – Emile Zola

8. Best and worst part of being a writer:

The best part is the freedom, which encompasses a lot of things, that this job provides me. The freedom to create my own schedule, the freedom to both work and hang with my kids, the freedom to expand my imagination, the freedom to know that my career feels pretty limitless. I truly feel so, so blessed to be able to do what I do and get paid for it.

The worst part? Well, a lot of it, even though, yes, it does feel limitless, is out of my control. Time of My Life did really well, in no small part due to the press it received, and if it hadn’t received such press, it wouldn’t have become a best-seller. Does that make it any less good of a book? Of course not. But there are a lot of great books out there that go unnoticed…and unfortunately, that’s just how this business works. So many things are out of your hands: marketing, PR, reviews, co-op, etc, that you sort of just have to accept it and do your best with what you can. But that can be tough, especially for someone like me who is Type-Z in everything non-career related but Type-A with her career.

Be open to criticism. I say this all the time, but it’s just so imperative. I think one of the biggest mistakes that aspiring (and established) writers can make is assuming that they’re as good as they think they are. I should know: I thought that initial manuscript that never sold was GENIUS. When I went back and reread it several years later, it was HORRID. Just horrid. Thank goodness it never sold! I’ve been fortunate enough along the way in my career to glean some truly constructive criticism, and if I’d never listened to it, I’d never have grown as a writer. Take your ego OUT of the equation, and try to improve yourself with every opportunity.

10. Tell us a story about your writing experience.

Sure, well, as I mentioned above, before I wrote The Department of Lost and Found, I wrote another manuscript, which landed me an agent but didn’t get me a book deal. I got enough positive feedback from editors, though, that I was certain that this fiction thing COULD happen for me, even as demoralizing as it was to get so close and NOT get that offer. So I buckled down, put my disappointment aside, and wrote the first draft to what is now The Department in about three months. My agent hemmed and hawed, helped me through some revisions, but it was pretty obvious that she had lost faith in me. I was freaking out – I couldn’t get her to return my emails, my phone calls, and finally, several months after I handed in my last draft, I got her on the phone, and she said, “I feel like going out with this book will do more harm than good for your career.” I remember the quote very succinctly. She gave me the offer to go back to that first book and revise it (NO INTEREST – it sucked!), write an entire DIFFERENT book, or…part ways.

Well, obviously, you can guess the one that I did. I told her I’d get back to her in a few days but knew as soon as I hung up the phone what I was going to do…and think I emailed her the next morning. Because I knew – and I say this A LOT on my blog – that I could write the best book in the world, and she wouldn’t believe in me. She’d lost faith in me as a writer but also as an asset, and this is the most damaging thing ever. Your agent HAS to have your back, HAS to be your advocate or else you are dead in the water. If I’d stayed with her, I’d never have published that book, much less gotten FOUR offers for it within weeks of signing with my new (and current and FABULOUS ) agent.

Look, it was a leap of faith, but I had faith in MYSELF and my book. I trusted my gut, and while it was ridiculously terrifying to leave my agent – everyone knows how hard they are to get – I had to believe that I had something great to offer. My now-agent believed that, and here I am today.

Where can people buy your book(s)?

Time of My Life is available pretty much everywhere: Amazon, Barnes and Noble, Borders, Indie stores, and is also a Target breakout book, so will be featured in stores from 8/9 through 10/11. I’d be indebted if you’d pick up a copy! And writers, feel free to swing by my blog and post a question! http://www.allisonwinn.com/ask-allison/