This was on Craigslist.org:

“I’m looking for short stories writers of romantic fiction and erotica. 1,500 to 4,000 words. One time flat fee payment, you will retain the rights.”

(A second) interview with Allie Boniface 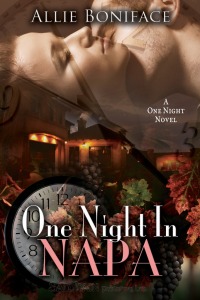 Allie Boniface is a contemporary romance author and is celebrating the release of her fourth novel! When she’s not penning her latest adventure, she’s a full-time high school English teacher who lives with her husband in the northern NYC suburbs. Allie is excited to be here today to give readers an inside scoop on her latest novel, One Night in Napa. First, here’s the blurb to whet your appetite:

Journalist Grant Walker has one chance to salvage his job and his relationship with his domineering father. Terrorists have kidnapped a fading film star’s son, and Grant has scored the first interview with the grieving mother. Even better, a new twist has just arrived on the scene: an illegitimate granddaughter who hasn’t been heard from in seven long years.

It’s the story of a lifetime, and all Grant has to do is deliver.

After discovering a terrible secret about her birth, Kira March left home vowing never to return. With her father kidnapped and her grandmother cracking under pressure, it’s up to her to find and destroy all evidence of that secret. Trouble is, a reporter has weaseled his way into the house looking for answers – and he isn’t leaving until he gets them.

Yet as the hours pass, Kira finds herself falling for the very man who could destroy her. And when Grant comforts her in the wake of a midnight tragedy, he remembers why it’s a bad idea to get emotionally involved with an interview subject. Especially when the family name is on the line…

Why Napa Valley? Well, my other two One Night… books are set in the eastern part of the country, Boston and Memphis, and I really wanted a location someplace out west.  Plus, my husband and I spent a few days in Sonoma and Napa Valley on our honeymoon back in 2001, and I found the whole area just charming.  We were lucky enough to take a hot air balloon ride over the vineyards – what a sight at dawn! There is something inherently romantic about rolling green hills, grapes, and beautiful buildings tucked into the landscape. I think my cover artist captured the feel of Napa Valley perfectly.

Why just twenty-four hours? I stumbled onto the idea of a “24-hour romance” a few years ago, during one of my morning runs.  I’m not sure where the idea came from, but I started thinking what if two people met and fell for each other overnight? Sure, most romances unfold over months or even years, but we’ve all heard of those nights when fireworks go off the moment two people set eyes on each other.  I wanted to offer the romance genre something different and explore that possibility.

What’s next? Well, I’m excited to have another contemporary romance releasing with Samhain Publishing later this year, Summer’s Song. It’s about a woman who goes home to her small town after leaving 10 years earlier when her brother was killed in a car accident. In the middle of settling her father’s estate, she begins to experience strange flashbacks…which eventually lead to her discovery of what actually happened the night her brother died. The hero, a hunky carpenter working on the house she’s inherited, has demons of his own to face: his mother’s ex-husband, who is stalking them across the country. There’s no time for romance with everything that’s happening in the tiny town of Pine Point…or is there?

I’m also currently in the early stages of a fourth One Night… book, One Night in Savannah. It’s about a lawyer who writes a best-selling novel about a true event that happened when she was in college – the death of a sorority sister. The hero, who attended the same college, wants to turn her book into a stage play – but he wants to change the events to mirror what he believes actually happened that night. I hope to explore the issue of what happens when two people remember a traumatic event much differently – and are attracted to each other in the meantime!

Can we see a peek inside One Night in Napa? Sure, here’s one of my favorite excerpts. It happens around midnight, after Grant and Kira have been shut up together inside the March mansion for hours. After a glass of wine and some heartfelt conversation, the two polar opposites find an attraction growing…

“Okay,” she said after a minute.

“You can take my picture.”

His breath stopped. “Seriously?” More than an interview, more than a front-page story, framing that face in just the right light left him off balance.

“Yeah.” She ran her fingertips down his chest. “Before I change my mind.”

Grant had no idea what had changed it to a yes in the first place, but he wasn’t about to argue or question. He dragged out his favorite Nikon and two different lenses. He scanned the room. He looked back at her, fragile and wide-eyed. Then he frowned at the glass and dark granite that lined the kitchen. “Not here.”

The lights flickered a third time, and Grant wondered how long before they lost power altogether. He fought the need swelling inside him, turning his legs to jelly. He had to keep his head together. He had to act like this wasn’t the fucking chance of a lifetime, like it was just another evening of taking a few shots. “Okay.”

She had already brushed by him and was waiting at the foot of the staircase when he reached the cavernous space.

“Here?” She looked behind her, up the circular sweep of carpet.

For a moment, Grant’s vision blurred, and all he saw was Kira pressed against him, her fingernails etching lines in his skin as he peeled away layers and tasted the curve of her collarbone.

“Walker?” She waved a hand in front of his eyes. The vision disappeared.

“Sorry.” He studied the shadows of the great room and shook his head. “In there.” He pointed to the parlor.

She nodded and padded into the room on noiseless feet. She stopped for a moment in front of the fireplace, then sank onto the hearth and crossed her legs on the white marble.

Thunder crackled, and the house groaned under its own weight. Grant barely noticed. He kneeled on the sofa and started with her face. Heart-shaped chin. Round dark eyes. No smile. He zoomed out for a view that took in her entire delicate frame. She sat with her arms wrapped around her knees, drawn up to her chest. Protecting something, he thought. Keeping out the camera, even though she’d been the one to suggest the photos in the first place.

He dropped the camera. “Can you—” He motioned to her hands, hoping she’d read his thoughts.

Her eyes filled, but she dropped her arms and let them fall onto her lap. “Sorry. Better?” It was a whisper. She shook the hair from her eyes, and he saw anguish, anger, stubbornness in the way her gaze glittered and moved across him.

He changed angles, moving to her far left side, until all he could see was her sharp profile and the darkness beyond. His throat tightened. God, she was beautiful. His fingers twitched. He continued to shoot, changing position an inch or two at a time. He stopped only once, to switch to black and white film.

The minutes passed, and she relaxed by degrees. By the time he found a place to balance on the opposite side of the fireplace, she’d loosened her grip on her ankles. Her smile became true again.

“You like this,” she said. “More than the journalism, I’d guess.”

“What gave it away?” He lowered the camera and grinned. She cocked her head and gave him a flirtatious pout that seared him in the gut…

Want to read more? One Night in Napa is now available from www.mybookstoreandmore.com . And if you like that story, check out One Night in Boston and One Night in Memphis, available in print at the same website.

Wendy, thanks so much for having me here today! 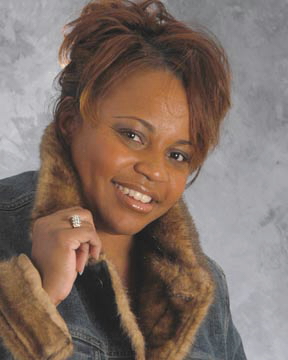 1. Tell us about your latest book.

My newest novel is Loving Simone will be released March 13, 2009. The novel is a mixture of romance and erotica. I believe it’s a new genre that’s now called Romantica. From the outside, Simone (the main character) has the perfect life and family. However, the inside tells of a different story. After ten years of being the faithful, dutiful wife and mother, Simone desperately struggles with releasing the hidden desires of pleasure she cannot seem to get from her husband, causing her to turn to self-fulfillment and outside influences. Jackson, her hubby, is too busy focusing on the women who work for him, self-indulgence, and sticking his pole in every hole, rather than his wife. Darius is every woman’s dream and has had a crush on Simone since he was a teen. When their paths cross, all of Simone’s inhibitions are released and finally someone, other than Jackson, is Loving Simone.

This novel is definitely my best work and I’m looking forward to receiving the responses of my readership!

2. How did you get started as a writer?

I’d always been an avid reader, which is something I truly miss now. There never seems to be any time to relax and read someone’s work other than my own. After reading Homecourt Advantage by Rita Ewing and Crystal McCray Anthony, I decided to try my hand at writing a novel. At that time, I had no idea how easy it would be. I harbored a talent I knew nothing about until I sat behind my computer and typed the first chapter to Anything Goes. What a fantastic feeling it was to create a time, place and cast of characters based solely on my imagination.

A typical day for me is working on my publishing business and creating book cover and web site designs, as well as typesetting for my clients. I pretty much stay in my pajamas all day, unless I need to run errands to the post office or the bank, maybe the grocery store. I lead a boring life, and I love every minute of it! Usually around 11 p.m. is when I will focus on writing.

Unorganized. However, surprisingly, I know where everything is!

There are several references I refer to on a regular basis, but the top five books I use are:

4.  The Writer’s Guide to Character Traits

1.  I love Doritos and Pepsi on a Saturday night, with a good movie.

2. I’m afraid of speaking in front of a large group.

“Never allow anyone to become your priority while you become their option.”

8. Best and worst part of being a writer

I’ve yet to experience anything too bad about being a writer. As with anything else, I take the negativity with a grain of salt and keep it moving. The best part of being a writer is being able to touch people with my novels. It’s a good feeling when a reader sends me an emailing telling me how much they were moved by my words.

Research the business of publishing. Continue to hone your writing skills. Learn from the mistakes of others.

All of my titles are available at Amazon.com, BarnesandNoble.com, Borders.com, and other online retailers, as well as in bookstores everywhere. To learn more about my novels, and me, you may visit www.JessicaTilles.com. To learn more about Xpress Yourself Publishing and its authors, please visit www.XpressYourselfPublishing.org. Also visit www.TheWritersAssistant.com to view samples of work I’ve done for other authors.